Field time may have been limited by the pandemic, but this year had plenty of sporting moments that will go down in history as game-changers
Author: Mazola Molefe
Thu, Dec 31, 2020

One by one, borders closed. Then there were travel bans. Fans were told it was not safe to watch their favourite stars at the stadiums. Life came to a standstill… almost.

But even in the midst of a global pandemic, somehow football (and, gradually, other sports too) found a way to still entertain us in 2020, leaving us with some memorable moments. A few that stood out in what we will forever remember as the year of the pandemic:

For some context on what a big deal it is to now watch this great club in the English Premier League again, my wife and I had just met in 2004 when Leeds were relegated from topflight football. A month after they bounced back from their 16-year hiatus, we celebrated 10 years of marriage. The two are unrelated, but I was just making a point.

I am not a Leeds fan, though I know one who has been painfully supporting them and bombarded me with text messages to watch his club on the night they got promoted. He hasn't stopped talking about it since. An incredible feat that we all celebrated with Lucas Radebe like he was still based at Elland Road.

Felt a bit like Leeds were having their own mini goal of the season competition last night. #lufc pic.twitter.com/7VSyzolSO6

Jingles's achievements in 2020 alone should give him enough material to publish a memoir – going from signing a lucrative new contract with Mamelodi Sundowns and clinching a treble, to then jumping ship and taking on what's arguably the most difficult job for any club coach on the African continent.

The year began with Mosimane uncertain about his future at Sundowns and seriously contemplating taking a sabbatical.

It ends with the former Bafana Bafana coach in charge of Al Ahly, where he has already won two trophies (the club also won a treble, but Mosimane's predecessor takes the credit for the Egyptian Premier League title), adding to the three he won at Sundowns before his sudden exit.

Mosimane became the first non-Egyptian African coach calling the shots at a club that is second to only Real Madrid when international titles are tallied up. He's joined an elite list of coaches with two CAF Champions League honours. Talk about black excellence! 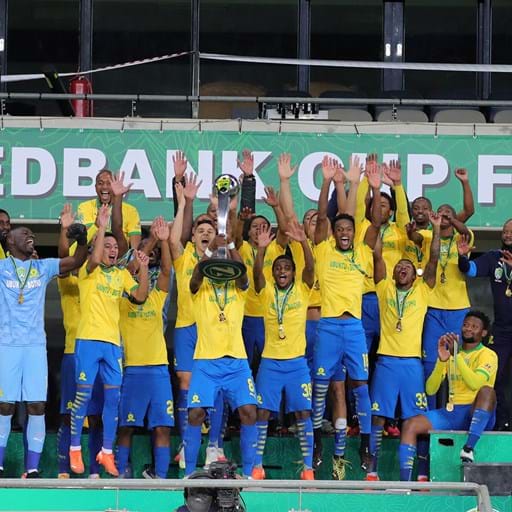 There were questions around how the world of sport, football included, would respond in the wake of racial unrest – particularly the death of George Floyd, an African American killed by a white police officer who knelt on his knee for a reported duration of eight minutes.

At the height of the Black Lives Matter movement, several soccer leagues were due to restart having been halted by the Covid-19 pandemic.

Football authorities often tiptoe around race matters, but the English FA took a stand. In fact, all clubs have now made taking the knee the norm, speaking out against racism and any kind of prejudice in a league that is incredibly diverse.

At the resumption of the 2019/20 season in June, Premier League club captains and the Professional Footballers' Association proposed a shirt tribute where the surnames of the players would be replaced by the words "Black Lives Matter" on the back of their jerseys. This was done in a full round of fixtures upon the restart, with the phrase on the sleeves from then onward.

Manchester United striker Marcus Rashford forced the UK government to change its policy on free school meals for children during the summer holidays.

His campaign had started in March 2020, shortly after the Covid-19 lockdown in his native country, leaving thousands without meals due to school closure.

Rashford, while still scoring goals on the pitch, was appointed MBE in October and vowed to continue his campaign to end child poverty.

These three clubs probably deserve a dedicated page of their own, even if their success this season can be measured differently.

Liverpool ending their 30-year drought by winning the club's first league title since 1990 was definitely a highpoint this year. Their fans are still celebrating.

Swallows, nicknamed hlala kwabafileyo (the living dead) during the most turbulent times at the club, leading to their relegation from the Premier division five years ago and then going completely off the grid in the professional ranks a year later, bounced back in September.

The Dube Birds finished 2020 as joint log leaders in the DStv Premiership. The owners had to buy the status of a lower tier club in August 2019 to get to where they are today, but their long-suffering fans (one of them being my Dad) don't care.

It's not at the same scale, but worth mentioning that Orlando Pirates finally won a trophy after six years of huffing and puffing. Pity there were no fans at the stadium.

WATCH: Breaking down the reasons behind Banyana's success

All eyes on 'Roadblock'