Film and TV sound recordist Mdanda remains undeterred by being in the minority as continues her impressive work on local and international productions
Author: Kulani Nkuna
Thu, Jan 07, 2021

Have you ever marvelled at an exquisitely framed long shot of two people talking on screen? While in awe of the detail and the selection of what is presented on the screen, the mind wanders as to where the sound comes from because the framing would not allow for a boom operator to get anywhere close to the action.

Before the actors step onto the scene, there is a huge collaboration between the good people at wardrobe/ costume and sound about placing small microphones onto the clothing the actors will wear. The clothes need to be specific to not disrupt the sound collection and remain fixed, no matter the actors' movements.

To do this, the sound assistant needs to get up-close and personal with the characters to secure the best sound. This may include inserting microphones in the performers' unmentionables, in between their breasts, or in their hair.

Initially, this may cause a great deal of discomfort, but at some point ijob yijob and there is nothing particularly exciting about this endeavour. So, actors on a long shot at the beach or the streets usually have a microphone somewhere on their person.

Nokufika Mdanda, a film and television sound recordist from the sugarcane hills of KwaDukuza, KwaZulu-Natal, recalls a non-incident with Benoni's esteemed star on set one day. 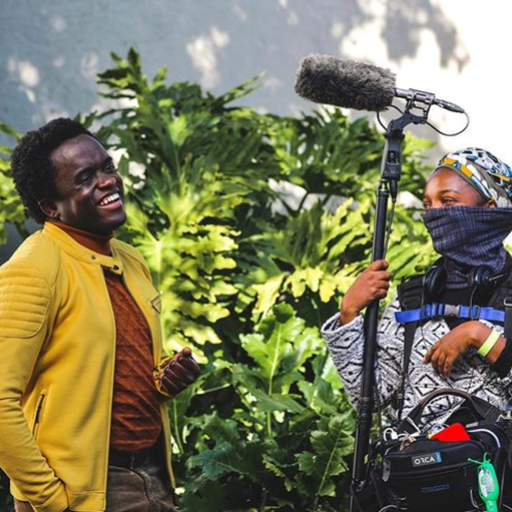 "It was not a big deal as I had anticipated, she was very cool about it and let me get on with it and I did my job."

However, on the set of Inescapable, she met some résistance from Hollywood character actor, Marisa Tomei.

"She was uncomfortable with me inserting a mic in between her breasts. She preferred that the costume ladies do that task. But I told her that I need to this myself in order to get the best sound possible. I am trained to do that, not the costume staff. Fortunately, she understood and was relaxed about it for the rest of the film."

Mdanda could casually name drop stars and films she has worked on all day. But it's also worth mentioning that her CV boasts sound work on Gerard Butler's Machine Gun Preacher and Idris Elba's Long Walk To Freedom. Locally, she has done some films on KykNET and Mzansi Magic. She is also a sought after sound recordist in the television commercial sector.

So, what does a sound recordist do exactly? Sreenskill.com offers this intervention:

"Sound recordists capture all of the sound on location for a film or TV programme. This can include dialogue, singing, and action – from performance to real events. They set up mics and deal with any issues to do with their placement, thinking about the combinations of mics they use – such as boom microphones and hidden 'personal' or 'radio' microphones – to keep consistency with the shot and shot size and to avoid issues such as phasing (time delays) between the mics."

The journey was not always easy for Mdanda, who got her big break under the tutelage of an imposing, mean and hulking bearded man. "It was not easy in the beginning hey, that man was harsh," she recalls.

While film and television production crews are predominantly male enclaves, it is easy for Mdanda to fashion herself as a trailblazer or activist. She is reluctant to take on such a mantle, insisting that her mere presence on these sets is enough to inspire other women. In fact, it was a visit to an inyanga who foretold a future wherein Mdanda would be working with women in a male-dominated field. This prophecy speaks volumes about the multiple ways protest can occur.

"In the beginning, actors would make sexist or snide comments when I was putting mics on them, but I had to stand my ground and tell them that we are at work and I won't tolerate any nonsense," she says.

"My attitude to errant colleagues gave strength to other female colleagues about treatment on set, without me having to shout or stand on podiums to preach. I believe that things are changing slowly and we are afforded the respect we deserve according to our skills and ability."

Hear me out: Kim K may really be a white supremacist

LONG READ: A horror film about the omnipresence of abuse